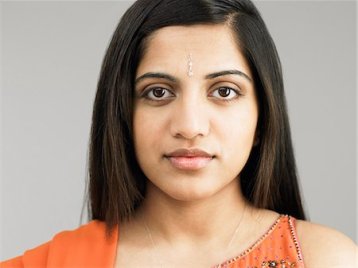 All my life I saw myself the way others did.  I was insignificant.  I didn’t matter.  I was unloved.  I was neglected, ignored, mistreated and devalued.  Why?  I was a girl.  In some cultures, being a girl was an undesirable thing.  People didn’t want daughters.  They wanted sons.  My parents were no different.  When I was born, my father was furious and my mother cried.  “Another girl,” she wailed.  “We must have done something to anger the gods.”

I grew up believing that I was the gods’ punishment on my parents.  I prayed to the gods and asked them to appease my parents so that they would love me but the gods didn’t answer my prayers.  I tried so hard to make up for the calamity I had brought on my parents but nothing I did made a difference.  They either ignored me or mistreated me.  Even my sisters weren’t kind to me.  They said they wished that I had been a boy.  A brother would have been better than another sister.  I grew up very lonely and there were times when I too wished that I was a boy.  Being a girl only brought me misery and heartache.

Then, one night, I had a dream.  I was walking in a field.  All around me were lots of beautiful flowers of different colors.  Their sweet scent filled the air.  It was a sunny day with a blue sky.  I picked one of the flowers and breathed in its fragrance.  Ahead of me was a river.  I ran over to it and dropping to my knees, I leaned over and gazed at my reflection.  As I stared at my face, I heard a man’s voice say, “You matter to Me.”

Startled, I looked around but I couldn’t see anyone.  I was alone.  Did I imagine hearing the voice? I scrambled to my feet.

“You matter to Me,” the voice said again.

“Who are you?” I asked.  Strangely, I wasn’t afraid but very curious.  Was it one of the gods?

Jesus?  That was a strange name.  I had never heard it before.  Was He another god?  “What do you want with me, Jesus?”

“I want you to know that you matter to me.”

“Girls are gifts from God.  They were created in His image.  They are precious in His sight.  You were created because you were loved and wanted.  Even if your parents forsake you, I never will.  I will always be with you.”

The clap of thunder jolted me awake and I sat up, staring into the darkness, thinking about the strange dream.  It had seemed so real.  In the stillness, I whispered, “Jesus, if You’re real, send someone to tell me more about You.”  I lay back down and went back to sleep.  I didn’t expect anything to happen.

Two days later, two women came into our village and when they began to talk about Jesus, I was blown away.  Jesus had answered my challenge.  I didn’t want to mention the dream in front of my parents.  I wasn’t sure how they would react.  We sat there for more than an hour, listening to these women tell us about a Savior who had given His life to save us.  I was enraptured.  I wanted to know more about this Jesus who spoke to me in a dream.  After the women promised to visit again, I followed them outside and told them about my dream.

One of them smiled and said, “Yes, girls and women matter to Jesus.  He saved a woman who would have been stoned to death for committing adultery.  He let her go but told her not to sin anymore.  Women were involved in His ministry.  They provided financial and other support.  Jesus spoke to Samaritan woman even though in His culture Jews had nothing to do with Samaritans and men didn’t usually speak to women.  Even though He knew that she had married five times and that the man she was living with wasn’t her husband, He didn’t judge her.  In fact, when she admitted that the man wasn’t her husband, Jesus commended her for her honesty.  He didn’t make her feel bad about herself because of the choices she had made but offered her the same grace He offers to everyone.  Yes, Jesus has great love for us and women have played a vital role in church history and in the spreading of the Gospel.  You matter to Him and you matter to God.  That’s why He spoke to you in a dream and sent us here to tell you about Him.  And He loves your parents and sisters too.  That’s why He’s working on their hearts.”

The other woman handed me a book.  It was the Gospel of John.  I couldn’t wait to read it.  After we spoke for a while longer, they left.  That night, after I read the entire Gospel of John, I gave my life to Jesus.  I shared the Gospel with my family and told them about my dream.  When the two women returned, we were all baptized in the river.  My life has changed dramatically since my family and I accepted Jesus.   The love of God dwells in each of our hearts and we are sharing the Gospel with others.  My parents no longer lament over not having a son but rejoice because they have come to know the Son of God.

March 8 is International Women’s Day.  Let your daughter, mother, sister, niece, grandmother, aunt, friend and co-worker know that they matter not only to God but to you.  Celebrate every girl and woman around the world, especially those living in countries, communities and societies where they don’t feel wanted or valued.