I was in Prague’s old town when I noticed a few people looking up, frantically pointing and yelling.  I glanced up and saw a man about to jump.  I searched wildly about for a policeman and saw one approaching.  I dashed over to him, screaming, “That man’s about to jump.”

“Miss, that’s a sculpture of Sigmund Freud called The Man Hanging Out. 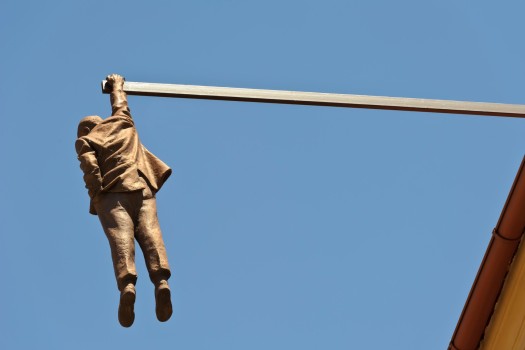 The Man Hanging Out is the unique sculpture of Sigmund Freud in Prague.  Apparently, it looks so real that fire and police departments have received frantic phone calls from people fearing that a man was about to fall to his death.  The sculpture depicts Freud’s inner struggles.  He is apparently pondering whether to hold on or to let go.

7 Replies to “The Man Hanging Out”