How do people feel when they find out that they have been adopted?  I once watched an episode of the soap opera, One Life to Live where a character named Destiny was devastated when she learned that her parents were actually her grandparents and that the brother she was so close to, whom she adored was actually her father.

When should adoptive parents tell their children that they are adopted?  Is there ever a right time to do so?  Wikhow offers the following tips:

Be positive when discussing your child’s adoption. If you speak positively about the adoption, your child will be less likely to feel upset or uncomfortable about it. Tell your child how happy you were to bring them into your family, and how much you love them.
Keep your explanation simple and age appropriate. Eventually, your child will have plenty of questions about the details of their adoption and their birth family. When you first tell them, however, try not to overwhelm them with details. Instead, give them a very basic and straightforward explanation of where they came from.
Answer your child’s questions clearly and honestly. It’s natural for your child to be curious and anxious about their background. They may ask questions about what their birth parents are like, where they are now, and why they chose to put your child up for adoption. They might also ask questions about how they came to be with you. Answer these questions to the best of your ability, but keep your answers simple and appropriate to your child’s age or developmental level.

Children may feel grief over the loss of a relationship with their birth parents and the loss of the cultural and family connections that would have existed with those parents.

There can also be significant concerns about feeling abandoned and “abandonable,” and “not good enough,”coupled with specific hurt feelings over the birth mother’s choice to “reject” the child” to “give me away” or “not wanting me enough.” Such hurtful and vulnerable feelings may be compounded should the child learn that the birth mother later had other children that she chose to raise herself – Mental Health Help

When it comes to sharing medical family history, it is difficult for an adopted child to do so.  It is a reminder that she is different from the others.  Many struggle with identity issues because they are no longer the person they thought they were.  Their parents are not their real parents and their siblings are not their real siblings.  They have questions such as “Who am I?” “Who are my real parents?”  “Am I ever going to meet them?”  “Why didn’t they want me?”  They feel guilty because they want to find out about their birth parents and feel that in doing so they are hurting their adoptive parents who loved and raised them as their own.

I have read stories where adopted children meet their biological parents and things don’t go well.  However, for some, making contact was better than looking at every stranger and wondering if that person was their mother or father.  Sometimes the hurt and pain that comes from knowing that they were given up for adoption put a damper on their reunion with their birth mother or father and many decide to severe any further contact. 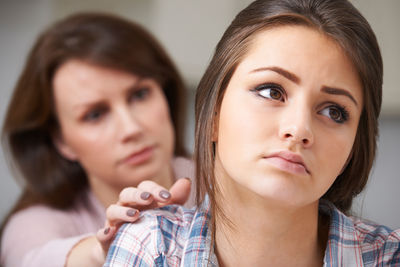 Adoption is a tricky thing but it could be a blessing.  I just read this story of a girl who knew that she was adopted.  It was never kept from her and she knew why her mother had given her up.  “I knew that my birth mother loved me so much that she wanted to give me a better life.”  Her adoptive parents were looking to adopt and they found her less than a week after she was born.  Growing up, her adoptive parents explained her adoption this way:  “We chose you.” To this girl, it was a “a wonderful way to put it to an adopted child.”

For some birth parents, giving their child up for adoption is a very difficult and emotional decision but they do it out of love.  They know that they can’t take care of the child and that it would be best for a couple who could to raise him or her.  For the adoptive couple, this is a gift, especially if they can’t have children of their own and want to be parents.

Not all adoptive children will see adoption as a blessing and will always question why their birth parents gave them away but hopefully, in time, they will accept that they were very fortunate to be placed in the care of people who have loved and raised them from birth.

Adoption is another word for love – Adoption.com