And at the ninth hour Jesus cried out with a loud voice, saying, “Eloi, Eloi, lama sabachthani?” which is translated, “My God, My God, why have You forsaken Me?” – Mark 15:34 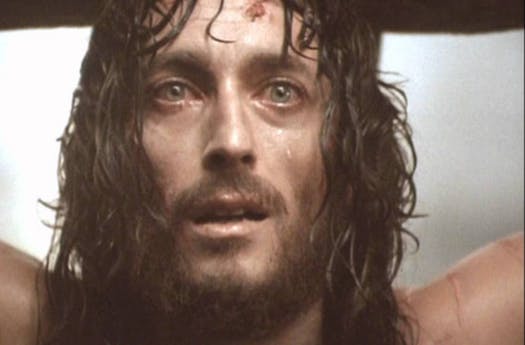 When Jesus was on the cross, He was mocked.  Those who passed by blasphemed Him, wagging their heads and saying, “Aha! You who destroy the temple and build it in three days, save Yourself, and come down from the cross!”  The religious leaders joined in the ridicule as well, saying, “He saved others; Himself He cannot save. Let the Christ, the King of Israel, descend now from the cross, that we may see and believe.”  It must have been painful for Jesus to hear them say those things.  These were the same people of whom Jesus asked of God, “Father, forgive them, for they do not know what they do” (Luke 23:34).

They had no idea of what was really at stake.  They were mocking Jesus about not saving Himself not realizing that wasn’t His purpose at all.  As He pointed out at the time of His arrest, if He wanted to spare Himself the agony of the Cross, “…do you think that I cannot now pray to My Father, and He will provide Me with more than twelve legions of angels?  How then could the Scriptures be fulfilled, that it must happen thus?” (Matthew 26:53, 54).

Had Jesus come down from the cross to save Himself, we would all be lost and eternally separated from God.  Love for the Father and us kept Jesus on that cross.  He was the Lamb of God who came to take away the sins of the world.  He was the Savior of the world.  God sent Him to die in our stead so that we could have everlasting life.  John 3:16 puts it so beautifully, “For God so loved the world that He gave His only begotten Son, that whoever believes in Him should not perish but have everlasting life.” When God sent Jesus into the world, it wasn’t to condemn the world but to save it through Him (Verse 17, NKJV).  The cross is our salvation and evidence of God’s incredible love for us.

As much as it pains me to see Jesus hanging from the cross whenever I watch a biblical movie about His life, it reminds me of what Jesus said to Nicodemus.  “And as Moses lifted up the serpent in the wilderness, even so must the Son of Man be lifted up,that whoever believes in Him should not perish but have eternal life” (Verses 14 & 15).

Sin separates us from God.  When Jesus was on the cross, bearing our sins, He was separated from the Father.  That was why He cried out, “Eloi, Eloi, lama sabachthani?” which is translated, “My God, My God, why have You forsaken Me?” (Mark 15:34).  Jesus became the Sin-bearer and it was that sin that the Father condemned.  Jesus was forsaken for our sake so that we would be forgiven for our sins once we accept His atoning work on the cross.

How terrible it is to be separated from our heavenly Father.  This sobering thought should motivate us not to live any longer like other people in the world do but to live as Jesus did–in loving obedience to the Father.  He was obedient even on to death.

Jesus laid down His life for us to show His love.  How can we return this love?  We do so by obeying Him and having faith in Him.  Today and everyday, let us live our lives for the One who willingly went to and stayed on that cross so that He could redeem us to God by His blood (Revelation 5:9).  Our redemption came a great cost (1 peter 1:18-19).

Redeemed by the blood of the Lamb;
Redeemed thro’ His infinite mercy,
His child, and forever, I am – Hymn #338