And he took the path to her house  In the twilight, in the evening, In the black and dark night. – Proverbs 7:8, 9

“Man, you have to be crazy to go over there,” Felipe told Simón.

“Her husband’s out of town.”

“So what?  You shouldn’t be going with her.  She’s trouble.”

“Amigo, she’s married!  You shouldn’t be getting mixed up with her.”

“Yes, and you can get burned.”

“I’d rather be a living jealous fool than an dead one.”

Simón looked daggers at him.  “Leave me alone, Man.  It’s my life and I’ll do whatever I want.”

“Suit yourself, Bro.”  Felipe turned and walked away.

After he was done, Simón sat down on the steps, mulling over what his friend had said.  Maybe he was right.  He should know better than to be in this mess because he grew up in the church.  His grandmother would be bitterly disappointed because she raised him to do whatever the Bible taught.  He had been doing pretty well until he met Alisa.

They met at the track opposite his school.  After running a couple of laps, he sat down on the bench to take a breather and to drink some water when she joined him.  She was dressed in a long sleeve tee shirt and spandex leggings.  She looked amazing.  “You looked really good out there,” she said.

“Do you run here often?”

“I run here too but I never noticed you before.  I guess until today, we were running at different times or days.  Do you live nearby?”

He grasped it in a firm handshake, his eyes meeting hers.  His face felt very warm and he knew it had nothing to do with his running.

“So, have you decided which college or university you want to go to?”

“I have my mind set on Cornell.”

She smiled.  “Good choice.  I know a few people who go there.  I went to New York University.  Do you have a major?”

She looked impressed.  “Good for you.”

The sun was beginning to set.  He had to get going before his grandmother started wondering where he was.  “I have to go,” he said, apologetically.  He would have rather stayed and continued talking to her.

He put his water bottle in his knapsack.  He stood up and she did as well.  He towered over her.  “It was nice meeting you, Alisa.” He said, his expression serious as he gazed down into her face.

“It was nice meeting you too, Simón.”

He knew he ought to walk away right then and there without a backward glance.  She was married.  His heart had sank when he saw the ring.  He should have known that a woman with her looks would be taken.  Every instinct told him to leave but he couldn’t seem to move.  “When can I see you again?”

She smiled.  “We can meet here tomorrow at the same time.”

“All right.  See you tomorrow.”  He turned and walked away.

The next day when he showed up to the track, she was there.  They met every afternoon after that until one afternoon she invited him back to her place.  He was hesitant.  Being out there in the open with her was one thing but being alone in her apartment was quite another.  “What about your husband?” he asked.

“I really shouldn’t…” he protested weakly.  She was wearing a summer dress with spaghetti straps and her hair fell in thick waves over her shoulder.  He wanted her so badly.  It was all he could think about these days.  And here was his opportunity.  It was within his grasp.  All he had to do was take hold of it…

“But you want to, don’t you?” she murmured.  “What we both want to do we can’t do out here.  Let’s go back to my place and enjoy each other.  It’s something we’ve both wanted since the day we met.  It’s no use denying it, Simón.  I can see it in your eyes and I know you can see it in mine.”  She took his hand and led him to her parked car.

She and her husband lived in an upscale low-rise building.  Their condo was on the fifth floor.  It was beautiful and spacious.   It was obvious that both of them had a big income.  He barely got time to admire the place before she took him to the spare bedroom where after closing the door, she started unbuttoning his shirt.  And as she dragged the shirt off, she bent her head and pressed her lips against his bare skin.  He stood there, his heart pounding and his chest heaving as he fought for air.  Soon they were both naked and she pushed him onto the bed.  He reached up and pulled her head down so that he could kiss her.

They made love there in the room and afterwards, he took the subway home.  They had other such trysts.  He hang around the library or somewhere until it got dark and then he would go to her place.  She buzzed him in and he took the elevator up.  Most of the time, hardly anyone was around which suited him fine.  No one knew about their affair, except Felipe who warned him that he was playing with trouble.  He sat there now, pondering whether or not he should end this now.  Then, his cell rang.  It was her.  “Are you on your way?” she asked.

He could say no and tell her right then that it was over.  “Yes, I’m on my way.”  He ended the call and got to his feet.  It was no use.  He was hooked.  He was in over his head and didn’t know how to get out of this.  And he wasn’t sure that he even wanted to although he knew that there was no future here.

He took a shortcut to the subway and had his head down so he didn’t notice the two guys approaching him until it was too late.  The first blow sent him flying on the hard sidewalk, knocking the wind out of him.  Then there were more blows and kicks, he tried to fend them off but he couldn’t and then he passed out…

When he regained consciousness, he was lying in a hospital bed.  He had gotten a severe beating but aside from a cracked rib and cuts and bruises, he was going to live.  He was the victim of a random attack by a couple of lowlifes.  Someone witnessed the attack and called the police.  He was lucky to be alive.  His grandmother and Felipe were there.  After she spoke to him, she went to speak to the doctor about when he could be discharged.

Alone with Felipe, he said, “I was on my way to see Alisa when they jumped me.”

“You were right, Felipe.  I should have listened to you.  I think that this happened to me for a reason.  It opened my eyes to what could have happened if her husband found out about us.  I could be worse off than lying here in a hospital bed.  Once I get out of here, I will call her and tell her that it’s over between us.”

Felipe grinned.  “Good.  Finally, you got some sense knocked into you.”

What happened to Simon was done out of evil but God used it open his eyes to the truth which set him free. 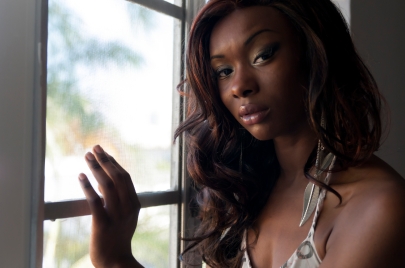