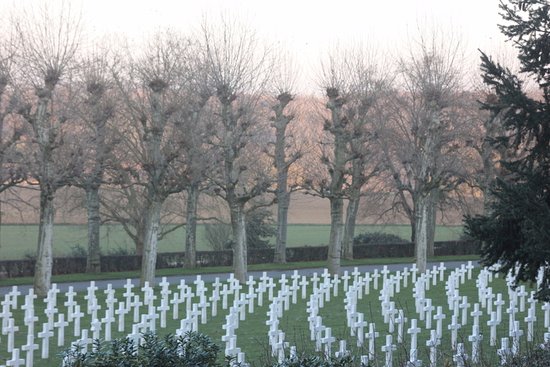 I couldn’t believe it when I heard that President Donald Trump cancelled his trip to a cemetery for “Americans killed in World War I, the White House citing bad weather that grounded his helicopter.”  He had been scheduled to lay a wreath and observe a moment of silence at the Aisne-Marne American Cemetery and Memorial, located adjacent to Belleau Wood and about 100 kilometres northeast of Paris.  It is a site of great importance to the US military.

The cancelled trip drew sharp criticisms from those who felt that the president should have found a way to get to Aisne-Marne, regardless of the weather.  Ben Rhodes, the former deputy national security adviser for President Barack Obama, accused Trump of “blowing off honouring American servicemen who died for us”

I agree with Mr. Rhodes.  Those soldiers braved snow, heat, rain and all sorts of conditions while they were fighting for freedom and serving their country.  Weren’t they worth the trip?

President Justin Trudeau visited the Vimy Ridge War Memorial in France and laid a wreath in honour for those who have served.  According to Global News, “Young, fresh-faced Canada sent 424,000 men overseas to fight in the First World War and nearly 61,000 of them were killed on foreign soil, far, far, far away from their homes in their 50-year-old country.  Those Canadians rest now in cemeteries all over Europe and their sacrifice helped forge a nation.”

This Remembrance Day marks the 100th anniversary of World War I and leaders like Trudeau, British Prime Minister Teresa May, Belgian Prime Minister Charles Michel, and U.S. President Donald Trump were invited by French President Emmanuel Macron to join him and more than 70 other world leaders in Paris for a special Armistice Day service Sunday, followed by a Peace Forum, where the leaders will discuss issues of international security.

For Trump not to go to the cemetery because of the weather is not only international embarrassment but a disgrace to the men who sacrificed their lives.  They deserve better.  They deserve a leader who would not allow anything to prevent him from visiting their memorial and laying down a wreath in their honor.  This was an international disgrace that may not soon be forgotten.