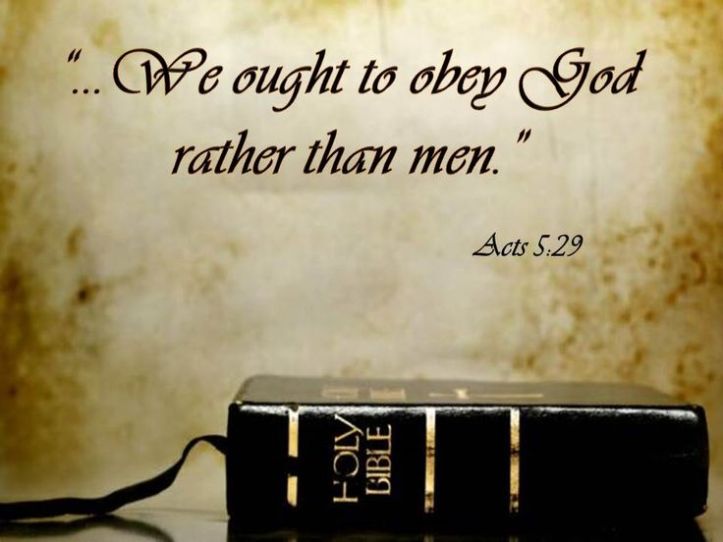 Then they reported to Saul, saying, “Look, the people are sinning against the Lord by eating the blood – 1 Samuel 14:33

Do we sometimes go to great lengths to obey those in authority but in the process we end up disobeying God?  It happened with Israel’s army when they came upon a forest where honey was flowing.  There was honey on the ground, ready for the men to eat but they didn’t eat it because of the king had placed them under a cursed when he swore, “Cursed is the man that eats any food before it is evening, and I have been avenged on my enemies.”

The people feared the king’s rash oath so no one took of the honey except Jonathan who was not present when his father made the people swear to keep the oath.  He dipped the end of his rod into the honey and put his hand to his mouth, his eyes brightening at the taste.  One of the people told him that “Your father surely made the people swear, saying, ‘Cursed is the man that eats any food this day.’ ” This person and the rest of the people were greatly distressed.

Jonathan’s reply was, “My father has troubled the land. See how my eyes have brightened, because I tasted a little of this honey.  How much more, if the people had surely eaten freely today of the spoil of their enemies which they found? But now the defeat of the Philistines has not been great.”

So, the people struck the Philistines that day and faint and famished, they took the cattle and sheep and slew them.  They ate them with the blood in them which was a violation of God’s commandment which states:  Only be sure that you do not eat the blood. For the blood is the life, and you may not eat the life with the meat.  You must not eat it. You must pour it on the ground like water.  You must not eat it, so that it may go well with you and with your children after you, when you do that which is right in the sight of the Lord (Deuteronomy 12:23-25).

When it was reported to Saul what they were doing, he turned on them and accused them of acting treacherously.  Then, he set up a stone to have the animals properly killed and he also built an altar to God to prevent further violation of the law.  The people had defiled themselves.  We must never allow anyone, no matter who it is to cause us to sin against God.  Perhaps it would have been better to incur the king’s curse by eating the honey rather than violating God’s law.

The people redeemed themselves when they stood up against Saul who would have killed his son, Jonathan when it was revealed that he had taken some of the honey, although it was done in ignorance.  Jonathan was willing to die but the people interceded.  They said to Saul, “Will Jonathan die, who has worked this great salvation in Israel? God forbid. As the Lord lives, there will not one hair of his head fall to the ground. For he has worked with God this day.”

They rescued Jonathan and he did not die.  They couldn’t stand by and allow the man who was brave enough to go over to the Philistine garrison to see what the Lord would do, trusting that He would work something out to deliver their enemies into their hands.  Through him, Lord brought them victory that day.  They people acted on their conscience.  It’s never too late to do what is right.

We should never let fear cause us to make bad choices.  When it comes to choosing whom we listen to or follow, it’s a no brainer.  “We ought to obey God rather than men” (Acts 5:29).  We must obey God no matter what.