Christ [redeemed] me, and He will [redeem] you also!

These words rang out loud in the marketplaces.  Myo Zaw made the impassioned plea to the crowd.  He was like Wisdom crying out in the marketplaces and pleading with the people to come her.  Myo’s message was one that the people needed to hear. He was on fire for Christ and he couldn’t hold it in.  It wasn’t always like this.

Before Myo Zaw encountered Christ he was the village drunk who got into fights with people and beat his wife and children.  The people who knew him thought he had gone insane, however, it was not madness that drove Myo to proclaim the message of redemption but the love of God which consumed him like a fire, refusing to be quelled.  He traveled throughout his region, sharing the Word of God, telling people, “how a sinner like me was found by God.”

Within three years, he had visited 100 communities, encouraged by his wife’s letters. In them, she wrote, “If your life can change by Christ, there is no one who cannot be changed by Christ.  So wherever you are going and sharing the Word of God, we are here to pray for you. I believe people will be changed by the love of Christ.”  And she was right about the people.  350 heard the message about Christ’s love, saw how it manifested in Myo’s life and they were changed.

Myo believed that his mission was the share the love of Christ which had transformed his life and that it was God’s will for him to go to a missionary in an area where people were unfamiliar with the Lamb of God.  He and his wife prayed about it and ten years later God sent them to the southern region of their country as Gospel for Asia supported missionaries.

At first when the people in the community learned that Myo and his family were Christians, they wanted nothing to do with them.  They forced the family out of the community.  They threw stones at their home, threatening to penalize anyone who spoke to the Christians and the children faced discrimination because of their faith. Myo and his family were  seen as enemies but in the midst of it all, they saw God’s grace working in their lives, getting them through these trials.  They trusted Christ during their hardships and through the ministering of the Holy Spirit, they learned how to love the people in their new community.

They reached out to the people by showing them movies that they liked to watch, teaching the children songs and caring for them.  When the parents saw the love of the couple for the community, they were amazed and they began to talk to them at the market.  This gave Myo and his wife the opportunity to share Christ’s love with them.  They cared for the sick and took people to the hospital as needed.  When flood waters destroyed homes and livelihoods, the couple and other GFA supported workers helped to provide relief.

Myo visited people and encouraged them by offering words of hope and life in Christ.  Through his actions, he proved that he was a redeemed man.  The love of Christ had transformed him from a drunk and abusive husband and father to a missionary of God.  The same love that had Christ had shown him he wanted to show to others.  Like the apostle Paul, he was filled with a zeal for the Lord who “who loved me and gave Himself for me” (Galatians 2:20).

Myo realized that greatest weapon is love.  It can transform hearts and lives.  It can destroy the strongholds which beset people who have no knowledge of Christ and kept them in spiritual darkness.  Once the love of Christ is revealed it lives are changed–despair gives way to hope and darkness to light.

Like Myo, ask God to use you to share the love of Christ with others.  Be a light in the world.  Shine for Jesus and let those around you or wherever God sends you know that no matter what state they are in, “He will redeem you also!” 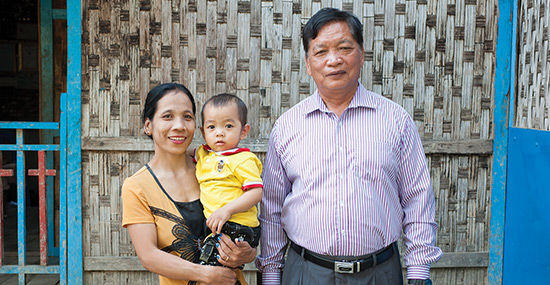