She had walked through the gate at Pembrook Manor, stopping only for a moment to look back at the impressive mansion in the midst of the sprawling land that you could see for miles.  Somewhere in that imposing structure was the man she was running away from.  She knew he had returned from his business trip yesterday evening and she wanted to be out of the house before she risked running into him. He had sent Mrs.  Allen, the housekeeper to take her to the drawing-room to spend time with him but she told the kindly woman that she was not feeling well.  She knew that if she had accepted his invitation, her resolve to leave in the morning would have weakened.  After Mrs. Allen left, she packed her bags, her heart heavy.

She felt terrible about leaving Katie.  She had grown so fond of the little girl but she couldn’t stay another day at Pembrook, knowing that she must leave there soon any way when Mr. Middleton married Miss Young.  The thought of him and the beautiful daughter of Baron and Baroness Young filled her with such pain.  How foolish it was to fall in love with her employer, an man of nobility and whose station was so superior to hers, a mere governess.  And it had been even more foolish to think that he would have any regard for her even if Miss Young were  not in the picture.

It was beautiful, crisp morning.  The sun was just rising.  She felt no pleasure in it, though.  Countless of times she had walked this way with him and found great delight in doing so.  Tears stung her eyes as she hurried to the spot where she was to meet the coach.

She stopped dead in her tracks, dropping her bags, her eyes large in her pale face, shocked to see her employer standing there.  “Mr. Middleton,” she gasped.  “What are you doing here?”

“I went for a walk.   And you haven’t answered my question.”

“That I can see but where are you going and for how long?”

She saw the carriage approaching and picked up her bags.  “I must leave Pembrook, Sir and return to my home from whence I shall not return.”

He came closer, his eyes troubled now.  “What do you mean?” he demanded.  “Why must you leave Pembrook and not return?”

With him so close, staring at her it was hard to remain resolute.  “You are to be married, Sir and I cannot remain at Pembrook when that happens.  So, the best thing for me to do is to leave.”

He grabbed her arms.  It was a firm grip but it did not hurt at all.  It was meant to secure her.  “You cannot leave,” he declared.  “I will not let you.”

“Sir, I must leave.  The coach is approaching.  I must catch it.”

He released her then but turned and strode toward the coach.  She hurried after him, desperate now to leave.  “The young lady will not be departing,” he told the driver.   Before she could say anything, the driver replied, “Very well, Sir,” turned around and drove off.

She was terribly upset now.  “Oh, Mr. Middleton, why did you send the coach away? My family is expecting to see me tomorrow afternoon.  I wrote and told them that I was coming home.”

“You can write and tell them that there has been a change of plans.”

Unable to hold it any longer, she dropped her bags, turned aside and ran into the woods, leaning heavily against the first tree she stumbled upon.  Mr. Middleton was immediately at her side. She pressed her hand against her mouth to prevent the sobs that rose in her throat but she couldn’t stop the tears.  “I cannot stay at Pembrook, Mr. Middleton,” she told him in a trembling voice.  “I cannot remain there when you are to be married to Miss Young.”

He looked puzzled.  “What the deuce are you talking about?  What is this talk of marriage between Miss Young and myself?”

She looked at him.  “Mrs. Allen intimated that there is soon to be an announcement of your nuptials.”

“Mrs. Allen is mistaken.  Miss Young and I have no plans to be wed.  It is the hope of my aunt that such a match should be forthcoming but alas for her, it is not to be. Miss Young’s affections are engaged elsewhere as are mine.”

She was relieved to hear that there was to be no marriage between Miss Young and him but who was the object of his affections?  “Mr. Middleton, nothing has changed. I am going to leave Pembrook as soon as other arrangements can be made.”

He took her by the shoulders and drew her to him.  “You are not going to leave Pembrook or me,” he insisted.  “You are going to stay there as my wife.”

She blinked at him, stunned.  “Your wife?” she repeated, dazed.

“Yes, my wife.  I love you, Miss Evans.  I fell in love with you the first moment I saw you but I hid my feelings because of convention.  Well, hang convention.  I want to marry you.”

“Oh, Mr. Middleton, I love you too.  I have loved you since the first time we met.  I never dreamed that you would harbor any romantic feelings toward me.  I am just an ordinary governess who has nothing to recommend her to you, except her deep love and fidelity.”

He held her face between his hands, his eyes shone with the love he had suppressed for so long.  “You have made me the happiest man in Hartfordshire Country.” He kissed her.  “Let us go home,” he said as he raised his head.  “Let us go back to Pembrook where you shall soon be Mistress.” 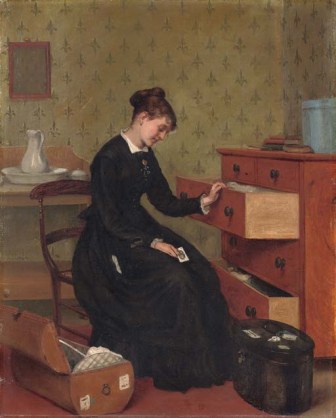