She stood there, face pale, heart-broken waiting for the train that would forever part her from the man she loved.  She had to leave.  After she heard the news that he had married, she knew that it was impossible for her to remain there in Yorkshire any longer.  She would go and live in London with her aunt.

Mrs. Clark, to whom she had been a lady’s companion for four years had not been pleased but Eleanor had been very insistent that she leave her position.   She couldn’t run the risk of seeing John and his wife at any social event she and Mrs. Clark might attend.  The sooner she left Yorkshire and its memories the better.  Memories.  They came unbidden to her mind and she released a sound that was a mixture of a sob and a groan.

For a moment she was transported back to the first time she and John met.  It was at a seaside resort.  She and Mrs. Clark were having tea when he walked in.  Mrs. Clark knew him so she invited him to join them.  He seemed pleased to do so.  Eleanor was very shy but he was pleasant and seemed very interested in her opinion on various things.  Mrs. Clark invited him to join them for dinner that evening.  It was a very pleasant affair and Eleanor was sorry when it was over.

The next morning when Mrs. Clark was confined to bed because of a headache, Eleanor went down to have breakfast alone.  John came in and joined her.  Afterwards, they went for a walk along the beach.  They found a quiet stretch of the beach and sat on a rock.  They spent a long time just talking and enjoying the sea air and each other’s company.  She and John saw each other every day during the month at the seaside and then he had to leave and return to Yorkshire.   She was sorry to see him go.  The remaining week at the resort was so dull without him.  She couldn’t wait to return to Yorkshire.

When she returned to Yorkshire he wasn’t there.  He had business in New York.  Several weeks passed and no word from him and then while they were having tea, Mrs. Smith informed Mrs. Clark that “Mr. Anderson was married to a Miss Taylor.”  What a shock it had been.  She had nearly fainted and both women were very alarmed.  “Whatever is the matter, child?” Mrs. Clark asked.  Eleanor got up and rushed out of the room.  She flew up the stairs and into her room, bolting the door before throwing herself on her bed and sobbing.  It took a long time for her to regain her composure and face Mrs. Clark who had by now read the news and was very displeased.

John wrote her a week later but she returned his letter unopened.  When he dropped by the house, she refused to see him.  She didn’t want to go anywhere for fear of running into him.  Life was unbearable.  Desperate, she wrote her aunt in London and asked if she could live with her.  Her aunt was delighted and urged her to come as soon as she could.

Comforted by her aunt’s kindness and eagerness to receive her, she made the arrangements.  She made sure that someone very commendable was secured for her position of Lady companion to Mrs. Clark who didn’t hide her displeasure at the turn of events.  For her, Eleanor’s departure was rather inconvenient as she had gotten quite used to her and now had to get used to another young lady.  Eleanor was sorry to leave because she had grown rather fond of Mrs. Clark.  Mrs. Clark couldn’t accompany her to the station because of a prior engagement and Eleanor was glad.  She wanted to be alone.

And now, here she was, waiting on the train that would take her far away from Yorkshire.  The sun was shining on her face but she couldn’t feel its warmth.  Nothing filled her except sorrow and pain.  In spite of everything, she still loved John.

“Eleanor!” She turned with a start and was shocked to see John at the end of the platform.  What on earth was he doing here?

For a moment he hesitated and then he made a dash toward her.  When he was standing in front of her, he removed his hat.  His eyes were earnest as they met hers.  “I feared that I would not get here in time.”

She tried to appear calm and composed although her legs felt like jelly and her heart was pounding wildly.  “What are you doing here, John?” she asked.

“I went to the house to see you but you weren’t there.  After some difficulty I managed to get the information from Mrs. Clark and I came here straightaway.  Why are you leaving, Eleanor?”

“I have to,” she said evasively.  “I’m going to London to live with my aunt.  You really shouldn’t be here, John.”

“But what about us?” he asked, looking bewildered.  “I thought we had something special between us.  Why were you going to leave without telling me?  I wrote you but you returned my letter.  Why, Eleanor?”

“Why?” she demanded.  The pain was too much for her to bear and it erupted now.  “You stand there before me demanding answers from me when I had to learn about your marriage from Mrs. Smith?”

Now he looked confounded.  “My marriage?  What on earth are you talking about?”

“I was there when Mrs. Smith told Mrs. Clark that you were married.”

“Mrs. Smith was mistaken.  I am not married.”

She said, “Mr. Anderson was married.”

“She meant my brother George.  He got married to Lucy Taylor.”

Eleanor stared at him, hardly able to believe what was happening.  “But, I thought…”

“Let’s find somewhere to sit,” he suggested.  They went over to a bench and sat down.  “It was all a terrible misunderstanding.  Oh, Eleanor, if you had only read my letter or seen me when I came to the house, this all could have been avoided.”

“I hadn’t heard from you for weeks and after what Mrs. Smith said, I thought you were writing about it in your letter and that’s why I returned it unopened.  I couldn’t bear to read it or see you.”

“My business in New York took longer than I had anticipated but I wrote you as soon I returned home.  Is that why you are going to London?”

“Yes, I simply had to get away.  Oh, John, I have been so dreadfully unhappy.  I thought you had married someone else and I couldn’t bear to be here any longer.”

“Eleanor, how could I marry someone else when I am hopelessly in love with you?”

“And I love you dearly.”

“So, now that this misunderstanding has been cleared up, are you still going to London?”

“Well, there doesn’t seem to be any point in doing that now, I suppose.  But, my position with Mrs. Clark has been filled.”

“Well, you have a new position to fill, Miss Philips and it is that of my wife.”

Eleanor smiled through her tears.  “I will be more than happy to fill that position, Mr. Anderson.”

“Good.  It’s effective immediately.”  He took her hands and raised them to his lips before he helped her to her feet.  He picked up her suitcase and they left the platform. 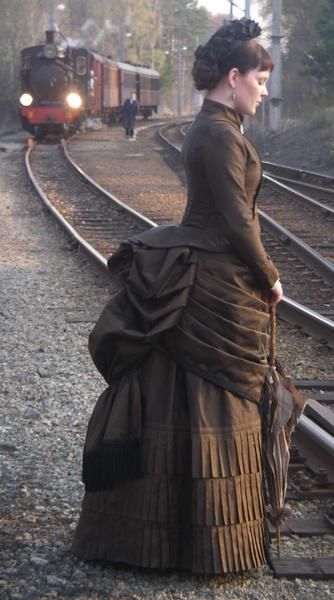