She stood on the pier watching the boats come and go.   She was once like an unmoored boat, drifting out into the currents of life because she had no anchor to hold her like the boats fastened to the dock.  It began when her parents were killed in a car accident and she had to live with her aunt and uncle.

Life with her aunt was terrible.  Her uncle was nice–he treated her with kindness but her aunt was a miserable woman.  She kept saying to her, “You are your father’s daughter.  You are just like him.  No good.  He was a good for nothing lout, a drunk and a cheat.  I don’t know why my sister ever married him.”

Day in a day out she said bad things about her Dad and her.  It got to the point where she stayed out late just to avoid going back to that house.  Her aunt thought that she was out drinking and partying with her friends and threatened to kick her out.  “I will not have that sort of behavior in my house,” she fumed.  It was no point telling her aunt that she hadn’t been doing any of those things.  The truth she had spent hours in the library until it closed and then she had gone to the pier to look at the boats and the flickering lights.  It was her favorite place.  She and her Dad used to go there.

She didn’t say anything in her defense but went on the laptop in the study and started searching for an apartment to rent.  Her uncle helped her to find a place and she gladly moved out.  She was relieved to be away from her aunt who was a Christian.  Her uncle wasn’t one.  If Christians were any thing like her aunt, she wanted nothing to do with them.

Of course things didn’t get any better after she moved out.  She struggled to get by.  She had to do a lot of things for herself–such as cooking, cleaning, laundry, paying bills, etc. Working part-time while studying was a great challenge.  Going out with friends during the week was out of the question now.  She went out with them on Saturday nights but she got tired of going to nightclubs and bars and meeting guys who had only one thing on their minds.

After she graduated, she got a job at a publishing company and life was improving.  She was no longer struggling.  She made new friends.  It was at a barbecue at one of these friends’ home where she met Jim.  Jim was a funny, handsome and easy-going guy.  They hit it off right away.  They spent most of the afternoon and evening together.  He drove her home and they arranged to go out for a bit to eat the following evening.  They started to see each other on a regular basis.

When Jim first told her that he was a Christian, she couldn’t believe it because he was the complete opposite of her aunt.  One evening he invited her to go to church with him on Saturday.  At first she was hesitant but then he persuaded her and she went.  The moment she set foot in the church, she was amazed at how warm and friendly the people were.  Jim’s parents were there too and he introduced her to them.  They invited both of them to have lunch with them after church.  She spent a very pleasant afternoon with the family.  Like her, Jim was an only child.   He and his parents were very close.  As he drove her home, he told her that they liked her very much.

Jim studied the Bible with her and she went to church with him very week.  Then one Saturday morning, she got baptized.  Her uncle went but her aunt didn’t.  When she heard that it was a Seventh-day Adventist church, she refused to go saying, “Adventists aren’t real Christians.  They are a cult.”

She smiled now as walked along the pier.  It was here where Jim proposed to her.  It was a beautiful, sunny afternoon.  They had just had dinner and had come here afterwards. As they walked slowly along the pier, he suddenly went in front of her and got down on one knee and popped the question. With a happy laugh and tears in her eyes she said, “Yes!”  He sprang to his feet and hugged her.  For the rest of the night she was walking on cloud nine.

She called her uncle and asked him to give her away.  As they drove to the church, he looked at her and said, “I wish your parents were here to see what a beautiful young woman you have become, especially your Dad.  He was a good man, Amanda.  He adored you.  And he was good to your mother.  It’s just that things got rough for him and he coped with it the only way he felt he could.  You are your father’s daughter and don’t let anyone make you ashamed of that.”

She smiled at him through the tears and squeezed his hand.  “Thanks, Uncle Bob.”  Yes, she wished her Dad were there that day to walk her down the aisle.

Now she stood there on the pier, anchored in her faith and in her marriage.  Yes, she was like one of the boats fastened securely to the dock. 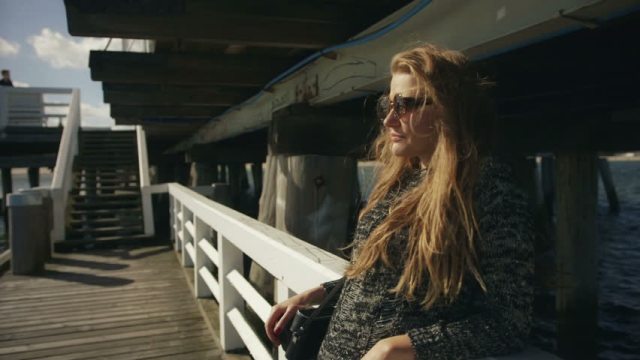