A few moments ago I read the news about Lisa Colagrossi, the WABC Eyewitness News reporter who died from a brain aneurysm.  She was only 49 years old.  She had just finished from covering a story Thursday morning when she realized that something was wrong. 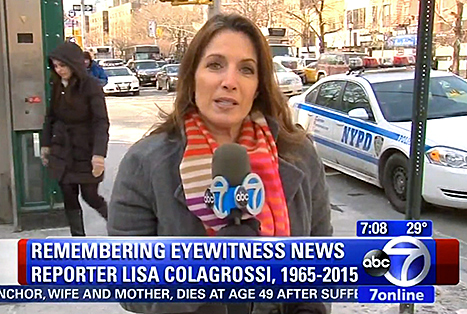 As I read this story, I was alarmed.  She was just one year older than me.  And she was a wife and mother.  I had to find out more about brain aneurysms and here’s what I learned:

What causes a brain aneurysm?

What are the symptoms?

Most brain aneurysms cause no symptoms and may only be discovered during tests for another, usually unrelated, condition. In other cases, an unruptured aneurysm will cause problems by pressing on areas in the brain. When this happens, the person may suffer from severe headaches, blurred vision, changes in speech, and neck pain, depending on what areas of the brain are affected and how bad the aneurysm is.

Symptoms of a ruptured brain aneurysm often come on suddenly. If you have any of the following symptoms or notice them in someone you know, call 911 or other emergency services right away:

If you want to find out how Brain Aneurysms are diagnosed and treated, visit this link.  You cannot prevent a brain aneurysm but you can reduce your risks.  Read here to find out how.

Notes to Women‘s thoughts and prayers are with Lisa Colagrossi’s husband, Todd and their two sons, Davis and Evan.