I was watching General Hospital and one of the characters received the news that she could not have children.  Any child she carried would not be carried to full term.  She would lose the baby.  What heartbreaking news.  It hurts to see women who want to be mothers and who would be great mothers unable to have children while those who are unfit have children.  It doesn’t seem fair.  Lulu, the character wondered why this happened to her since there was no family history of infertility.  Before that she blamed herself for her condition because she had had an abortion when she was a teenager.

I have often wondered why are some women unable to have children or carry them to full term?  There was a time when I was afraid that I would not be able to have children.  In biblical times barren women were looked down upon by other women.  Sarah was despised by her servant Hagar because she was able to conceive while her mistress couldn’t (Genesis 16:4).  Hannah was tormented by Peninnah, her husband’s other wife and rival because the LORD had closed her womb.  She made Hannah’s life a living hell until God blessed Hannah with children.  Rachel rejoiced when she conceived her first child, saying, “God has taken away my reproach” (Genesis 30:23).

In developing countries women face ostracisim and see their infertility as a failing or a curse.  Newsweek ran a story in 2008 about women around the world who are coping with infertility.  One woman was uable to conceive for the first 13 years of her marriage.  She said that people would ask a woman her name—and then, “How many children do you have?” When the woman answered “none”, they don’t know what they can talk to you about.”

What causes infertility in women?  Women’s Health Government has a fact sheet which answers these and other questions about infertility.

Infertility means not being able to get pregnant after one year of trying (or six months if a woman is 35 or older). Women who can get pregnant but are unable to stay pregnant may also be infertile.

Pregnancy is the result of a process that has many steps. To get pregnant:

Infertility can happen if there are problems with any of these steps.

Infertility among women is common.  According to  the Centers for Disease Control and Prevention (CDC) about 10 percent of women (6.1 million) in the United States ages 15-44 have difficulty getting pregnant or staying pregnant.

What causes infertility in women?

Most cases of female infertility are caused by problems with ovulation. Without ovulation, there are no eggs to be fertilized. Some signs that a woman is not ovulating normally include irregular or absent menstrual periods.

Ovulation problems are often caused by polycystic ovarian syndrome (PCOS). PCOS is a hormone imbalance problem which can interfere with normal ovulation. PCOS is the most common cause of female infertility. Primary ovarian insufficiency (POI) is another cause of ovulation problems. POI occurs when a woman’s ovaries stop working normally before she is 40. POI is not the same as early menopause.

Less common causes of fertility problems in women include:

What increases a woman’s risk of infertility?

Many things can change a woman’s ability to have a baby. These include:

Check out the Women’s Health Government fact sheet to find out how age can affect a woman’s ability to have a child; how long a woman should try to get pregnant before consulting a doctor; how a doctor determines if a woman and her partner have fertility problems and treatments.  They also offer more information (links) on infertility that may help you or someone you know who may be having difficulty getting pregnant.

Glen Meade Center for Women’s Health outlines the ways in which women can be tested for infertility:

There is hope for women experiencing infertility.  Glen Meade offers the following treatment options depending on the cause of the infertility:

Notes to Women wants to reach out to women facing infertily by encouraging them to read articles from women who are coping with it such as this one.  We hope that the tips for living with infertility will be helpful to you and give you some comfort. 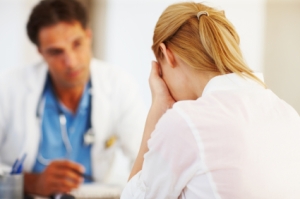 One Reply to “Women And Infertility”